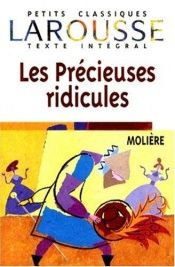 Les Précieuses ridicules is a one-act satire by Molière in prose. It takes aim at the précieuses, the ultra-witty ladies who indulged in lively conversations, word games and, in a word, préciosité.
Les Précieuses ridicules is a biting comedy of manners that brought Molière and his company to the attention of Parisians, after they had toured the provinces for years. The play received its Paris premiere on 18 November 1659 at the Théâtre du Petit-Bourbon. It seems not to have been staged before that in the provinces. It was highly successful and attracted the patronage of Louis XIV to Molière and company. Les Précieuses ridicules still plays well today.