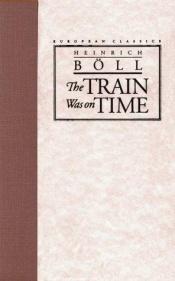 The Train Was on Time is the first published novel by German author Heinrich Böll. It dates from 1949.
The book centres on the story of a German soldier, Andreas, taking a train from Paris to Przemyśl. The story focuses on the experience of German soldiers during the Second World War on the Eastern Front where fighting was particularly vicious and unforgiving; Boll had earlier explored the same experience in A Soldier's Legacy which was written in 1948 but published later.
On his way to the war front, he meets two other Germans with whom he starts a dialogue and a short-term friendship; he also meets Olina, a Polish prostitute, who has been working for the anti-fascist partisans but who has become disillusioned with such activity, seeing it as begetting yet further cycles of violence and aggression rather than leading to a proper way out of the bellicosity of the situation. During their trip we learn much about horrors soldiers endure in the war, and the effect it leaves on a person. Andreas has a particularly passive attitude to his involvement in the conflict, and the inevitability of death hangs over the narrative in a tragic fashion.