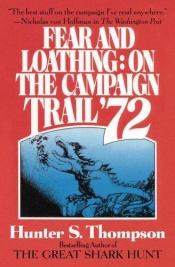 Fear and Loathing: On the Campaign Trail '72 is a collection of articles covering the 1972 presidential campaign written by Hunter S. Thompson and illustrated by Ralph Steadman. The articles were first serialized in Rolling Stone magazine throughout 1972 and later released as a book in early 1973.
The book focuses almost exclusively on the Democratic Party's primaries and the breakdown of the party as it splits between the different candidates. Of particular focus is the manic maneuvering of the George McGovern campaign during the Miami convention as they sought to ensure the Democratic nomination despite attempts by the Hubert Humphrey campaign and other candidates to block McGovern.
Thompson began his coverage of the campaign in December 1971, just as the race toward the primaries was beginning, from a rented apartment in Washington, DC. Over the next 12 months, in voluminous detail, he covered every aspect of the campaign, from the smallest rally to the raucous conventions.
Because of the freewheeling nature of the campaign, a first-generation fax machine was procured at great expense by the magazine for Thompson.

Kingdom of Fear: Loathsome Secrets of a Star-Crosse …