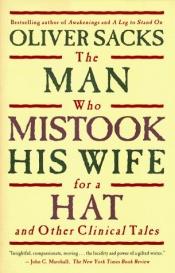 The Man Who Mistook His Wife for a Hat and Other Clinical Tales is a 1985 book by neurologist Oliver Sacks describing the case histories of some of his patients. The title of the book comes from the case study of a man with visual agnosia. The Man Who Mistook His Wife for a Hat became the basis of an opera of the same name by Michael Nyman, which premiered in 1986.
The book comprises twenty-four essays split into four sections, each dealing with a particular aspect of brain function such as deficits and excesses in the first two sections while the third and fourth describe phenomenological manifestations with reference to spontaneous reminiscences, altered perceptions, and extraordinary qualities of mind found in mentally handicapped people.

A leg to stand on