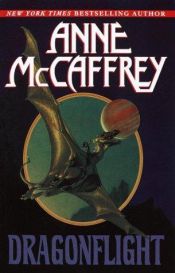 Dragonflight is a science fiction novel by the American-Irish author Anne McCaffrey. It is the first book in the Dragonriders of Pern series. Dragonflight was first published by Ballantine Books in July 1968. It is a fix-up of novellas, including two which made McCaffrey the first woman to win a Hugo or Nebula Award.
In 1987, Locus: The magazine of the science fiction & fantasy field ranked Dragonflight at number nine among the 33 "All-Time Best Fantasy Novels", based on a poll of subscribers.

All the Weyrs of Pern