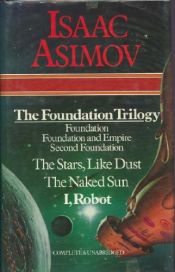 Second Foundation is the third novel published of the Foundation Series by Isaac Asimov, and the fifth in the in-universe chronology. It was first published in 1953 by Gnome Press.
Second Foundation consists of two previously published novellas originally published in appearing in Astounding Magazine between 1948 and 1950, making this the third volume in Asimov's Foundation series. Decades later, Asimov wrote two further sequel novels and two prequels. Later writers have added authorized tales to the series. The Foundation series is often regarded as one of Isaac Asimov's best works, along with his Robot series.
The term also describes the organization by that name which is the focus of the book. The organization's existence had been revealed in Foundation, searched for in Foundation and Empire, and makes brief appearances in this novel. It would not be described in detail until Foundation's Edge.