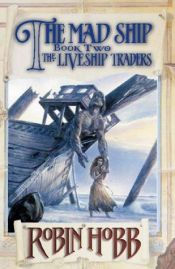 The Mad Ship is a book by Robin Hobb, the second in her Liveship Traders Trilogy. It appeared in the USA as simply Mad Ship.

I have not read this book yet, I am posting the book discription (since it was not already listed) incase someone else wanted to know what the book was about before reading. (like myself) As the ancient tradition of Bingtown’s Old Traders slowly erodes under the cold new order of a corrupt ruler, the Vestrits anxiously await the return of their liveship—a rare magic ship carved from sentient wizardwood, which bonds the ships mystically with those who sail them. And Althea Vestrit waits even more avidly, living only to reclaim the ship as her lost inheritance and captain her on the high seas. But the Vivacia has been seized by the ruthless pirate captain Kennit, who holds Althea’s nephew and his father hostage. Althea and her onetime sea mate Brashen resolve to liberate the liveship—but their plan may prove more dangerous than leaving the Vivacia in Kennit’s ambitious grasp.

Golem in the Gears