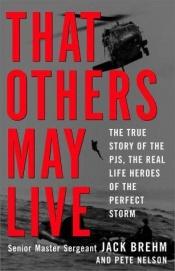 That Others May Live: The True Story of the PJs, the Real Life Heroes of the Perfect Storm

Pararescue jumpers, or PJs, are the military's most elite force, a highly trained group of men serving in the Air Force and the National Guard. In battle, they fly behind enemy lines to rescue downed pilots. In peacetime, PJs stay sharp with daring civilian rescues, recovering victims from scorching deserts, treacherous mountaintops, raging seas, and natural disasters. Their almost unimaginable courage first came to the public's attention in Sebastian Junger's The Perfect Storm, with that book's riveting account of how a helicopter of PJs plunged into the Atlantic during a tragic rescue attempt. Senior Master Sergeant Jack Brehm was the PJ supervisor coordinating their dramatic efforts that night.

That Others May Live not only sheds new light on that rescue, it also tells the thrilling story of Jack Brehm's devotion to the PJs, a career choice that transformed him from an aimless kid to an on-call hero. Jack's vivid account reveals not only the dangerous rescues and relentless training he and his fellow PJs endure, but the emotional struggles as well: losing friends, waiting anxiously to be called into action, and trying to keep their families together despite the enormous life-and-death pressures of the job. This book is a compelling and deeply personal story of one man's "ordinary" heroism that is, in reality, extraordinary.

Insecure at Last: A Political Memoir

How to Rig an Election: Confessions of a Republican …