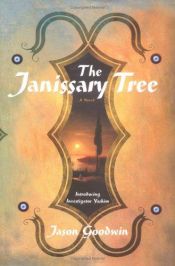 The Janissary Tree is a historical mystery novel set in Constantinople in 1836, written by Jason Goodwin. It is the first in the Yashim the Detective series, followed by The Snake Stone, The Bellini Card, An Evil Eye and The Baklava Club. The series features Yashim, an eunuch detective, who is resourceful and learned in both the Ottoman culture and that of the West, enjoys the trust of the Sultan and high officials, and prefers to live in a rather bohemian lodging outside the palace complex. The novel deals with the fictional aftermath the Auspicious Event, the disbanding of the Janissaries, once elite troops of the Ottoman Empire.
The Janissary Tree won an Edgar Award for Best Novel 2007 and has been translated into over 40 languages.