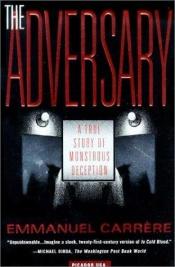 Acclaimed master of psychological suspense, Emmanuel Carrère, whose fiction John Updike described as "stunning" (The New Yorker) explores the double life of a respectable doctor, eighteen years of lies, five murders, and the extremes to which ordinary people can go.

Go Down Together: The True, Untold Story of Bonnie …

Jesus freaks : a true story of murder and madness o …

This Is For The Mara Salvatrucha