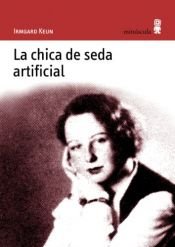 In 1931, a young woman writer, living in Germany, penned her answer to Anita Loos's Gentlemen Prefer Blondes and the era of cinematic glamour. The resulting novel, The Artificial Silk Girl, became an acclaimed bestseller and a masterwork of German literature, in the same tradition as Christopher Isherwood's Berlin Stories and Bertoldt Brecht's Three Penny Opera. Like Isherwood and Brecht, Keun revealed the dark underside of Berlin's "golden twenties" with both empathy and honesty. Unfortunately, a Nazi censorship board banned Keun's work in 1933 and destroyed all existing copies of , The Artificial Silk Girl. Only one English translation was published in Great Britain, before the book disappeared in the chaos of the ensuing war. Today, more than seven decades later, a new translation is about to bring this lost classic to light once more.

At the beginning of The Artificial Silk Girl, Doris vows to write down all that happens to her—not as a mere diarist, but as the glamorous star of her own life-story. "I want to write like a movie," she declares. But, instead of scripting what she hopes will be a quick rise to fame and fortune as either an actress, or as the mistress/wife of a wealthy man, Doris describes a slow descent into near prostitution and homelessness. She becomes the cinematic lens through which we see pre-war Berlin. It is not the dazzling and exciting city of promise it seems to be on the surface; Doris unwittingly shows us a bleak, seamy urban landscape. In the words of another character in the novel, "the city is sick." It is "sick" with intolerance, cruelty, and apathy … On every corner, there are beggars and whores and men selling perfume and posters of naked women. Doris hungers for a real home, real silk blouses, real love … But, there is no Hollywood happy ending awaiting her, as there is for Loos's Loralei Lee.

Doris begins her career as an independent woman on the stage, in a play by Schiller. Soon she wangles her way into getting one line to recite. But, then Doris steals a fur coat from the theatre's cloakroom … She flees from the police and from her home city of Cologne, and travels to Berlin to stay with a friend. In Berlin, she is unable to get a job. Nevertheless, as long as she has the fur, the ultimate symbol of luxury and seductive glamour, she feels invincible. And she is unwilling to return it. When her living situation with the friend and the friend's husband proves difficult, Doris leaves, but has no one to whom she can turn. Will she be able to survive on her own on the streets of Berlin? Will she, at last, be able to give up on the Hollywood dream?

Keun is an important literary voice—at last rediscovered and restored to the same heights as such literary luminaries as Isherwood and Brecht. The Artificial Silk Girl belongs on the bookshelf of students of German literature, women's literature, and master works of classic fiction, in general.