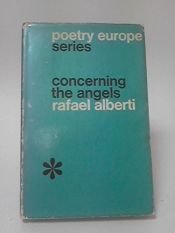 First published in Spain in the summer of 1929, Concerning the Angels (Sobre los angeles) is the great Spanish poet Rafael Alberti’s masterpiece, on a par with T.S. Eliot’s The Waste Land, Pablo Neruda’s Residencia en la tierra, and Federico Garcia Lorca’s Poeta en Nueva York. It marks a major departure from the light-hearted tone of the poet's earlier verse, which was notably influence by Andalusian folksong. It is at once intensely imaginative and intimately realistic, a lyrical illumination of the poet’s dark night of the soul.”

Christopher Sawyer-Laucanno lives in Massachusetts and teaches in the program in Writing and Humanistic Studies at MIT.