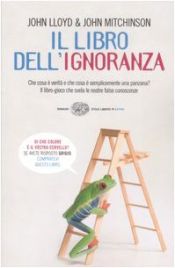 The Book of General Ignorance is the first in a series of books based on the final round in the intellectual British panel game QI, written by series-creator John Lloyd and head-researcher John Mitchinson, to help spread the QI philosophy of curiosity to the reading public. It is a trivia book, aiming to address and correct the comprehensive and humiliating catalogue of all the misconceptions, mistakes and misunderstandings in 'common knowledge' — it is therefore known not as a 'General Knowledge' book, but as 'General Ignorance'.
As well as correcting these "all-too-common" mistakes, the book attempt to explain how the errors have been perpetuated, and why people believe incorrect 'facts' to be true.

The Book of Animal Ignorance