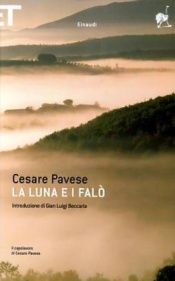 The nameless narrator of The Moon and the Bonfires, Cesare Pavese's last and greatest novel, returns to Italy from California after the Second World War. He has done well in America, but success hasn't taken the edge off his memories of childhood, when he was an orphan living at the mercy of a bitterly poor farmer. He wants to learn what happened in his native village over the long, terrible years of Fascism; perhaps, he even thinks, he will settle down. And yet as he uncovers a secret and savage history from the war—a tale of betrayal and reprisal, sex and death—he finds that the past still haunts the present. The Moon and the Bonfires is a novel of intense lyricism and tragic import, a masterpiece of twentieth-century literature that has been unavailable to American readers for close to fifty years. Here it appears in a vigorous new English version by R. W. Flint, whose earlier translations of Pavese's fiction were acclaimed by Leslie Fiedler as "absolutely lucid and completely incantatory."