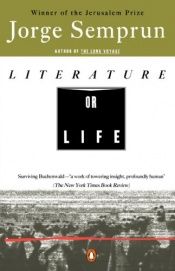 Jorge Semprun was twenty years old - already an accomplished philosopher and poet - when arrested by Nazis for activites in the French Resistance. He was sent to Buchenwald concentration camp. Literature or Life, a bestseller in France, is a deeply personal account not only of Semprun's time at Buchenwald, but also of the years before and after, of his painful attempts to write this book...created out of obsessions that returned him again and again like themes in a nightmarish rhapsody.His long reverie on life-as-death, now translated with the mesmerizing power of fiction. It is a profound contribution to Holocaust literature.