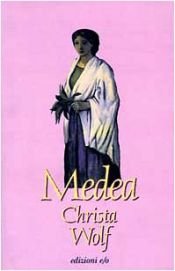 Medea is among the most notorious women in the canon of Greek tragedy: a woman scorned who sacrifices her own children to her jealous rage. In her gripping new novel, Christa Wolf explodes this myth, revealing a fiercely independent woman ensnared in a brutal political battle.

Medea, driven by her conscience to leave her corrupt homeland, arrives in Corinth with her husband, the hero Jason. He is welcomed, but she is branded the outsider-and then she discovers the appalling secret behind the king's claim to power. Unwilling to ignore the horrifying truth about the state, she becomes a threat to the king and his ruthless advisors; abandoned by Jason and made a public scapegoat, she is reviled as a witch and a murderess.

Long a sharp-eyed political observer, Christa Wolf transforms this ancient tale into a startlingly relevant commentary on our times. Possessed of the enduring truths so treasured in the classics, and yet with a thoroughly contemporary spin, her Medea is a stunningly perceptive and probingly honest work of fiction.

With an Introduction by Margaret Atwood. Translated from the German by John Cullen.