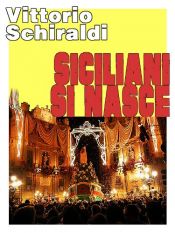 Remember the beginning of “Once Upon a Time in America,” the beautiful film directed by Sergio Leone? The little boys, their half-criminal, half-comic enterprises; and how they learned hard lessons, first of all to help them survive, and then to achieve something like success? The young protagonists of this novel resemble them.
This book is completely different from all other works that Sicilian writers have dedicated to Sicily.
SICILIANI SI NASCE tells the story of a group of young boys, including the author himself, who grew up in the streets of Palermo, in a neighborhood that was a version of the Bronx, in the years immediately following the Second World War, in a city dominated by the allied occupation forces and smuggling.
In that Palermo, where Lucky Luciano is already a “man of respect,” and the American colonel Charles Poletti is governor of the city, our kids practice little thefts, snatch purses while riding the trams, extort money, pick up almond husks from the market to sell to the pharmacist so he can make cyanide out of them; using umbrella ribs as swords they kill stray dogs and cats to sell them to a workshop that turns them into gloves…together they make up a little gang with their own “code” and special “tests” they have to pass before they can become “heroes” of a series of tender and gripping stories that help us to understand for the first time how and why a child can grow up to be a Mafioso. If, when you’re twelve years old you learn to make other boys your own age pay the “pizzo” (protection money) if they want to walk with their girlfriend through any of the seven streets your gang controls, why wouldn’t you grow up to apply the laws of racketeering as an adult? Meanwhile, however, they keep growing, they go to school, they discover sex, and then adventure and love, until they find themselves facing the dilemma that sooner or later touches everyone from Palermo: Should they go or should they stay, following different paths? To stay of course means resigning oneself to a reality that becomes more and more difficult to accept, since there is almost no hope of changing it; and staying carries the attendant risk of becoming either picciotti (young thugs) or victims of the mafioso system; while leaving, on the other hand, implies the possibility of becoming somebody, but with the risk of cutting off one’s roots definitively...

The Truth About the Harry Quebert Affair