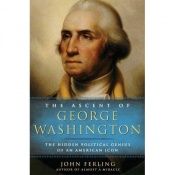 The ascent of George Washington : the hidden political genius of an American icon

Perhaps the most revered American of all, George Washington has long been considered a stoic leader who held himself above the fray of political infighting. What has gone unnoticed about the much-researched life of Washington is that he was in fact a consummate politician, as historian John Ferling shows in this revealing and provocative new book. As leader of the Continental Army, Washington's keen political savvy enabled him not only to outwit superior British forces, but--even more challenging--to manage the fractious and intrusive Continental Congress. Despite dire setbacks early in the war, Washington deftly outmaneuvered rival generals and defused dissent from officers below him, ending the war with the status of a national icon. His carefully burnished reputation allowed Washington, as president, to lead the country under the guise of non-partisanship for almost all of his eight years in office. Washington, Ferling argues, was not only one of America's most adroit politicians, he was easily the most successful of all time--so successful, in fact, that he is no longer thought of as having been political.