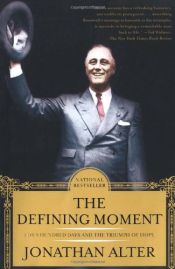 The defining moment : FDR's hundred days and the triumph of hope

The Defining Moment: FDR's Hundred Days and the Triumph of Hope is a political history book by Jonathan Alter about the first 100 days of Franklin D. Roosevelt's presidency. The book also focuses on how Roosevelt's childhood, personal life, diagnosis of polio, and early political life prepared him for those early days in which he established the New Deal to fight the Great Depression.
In The Defining Moment, Alter presents Roosevelt and his presidency as the perfect mold of man and moment. Alter argues Roosevelt's willingness to experiment and try new ideas, along with his willingness to abandon ideas that fail and try something else, proved to be a tremendous asset; in Alter's words, Roosevelt "threw a lot of things against the wall to see what stuck." Alter also said Roosevelt's inspirational leadership led to psychological victories which helped the country recover from an economic crisis. The book also highlighted the fact that prior to Roosevelt's election, some feared capitalism and democracy were in danger, while suggestions were raised by some about the need for fascism, socialism or communism.

The ascent of George Washington : the hidden politi …