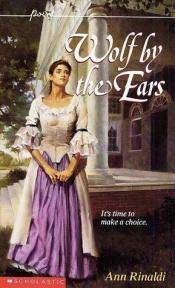 Wolf by the Ears

Wolf by the Ears is a young adult novel by Ann Rinaldi, first published in 1991. It is about a young girl, Harriet Hemings, who is a slave belonging to Thomas Jefferson. She tries to decide if she will stay and be a slave or leave and take her freedom; the other issue for her to decide on is whether "passing" is an option. Meanwhile, there are constant rumors about Thomas Jefferson being her father.
She deals with many obstacles along the way, including learning that, in the eyes of Jefferson, she is merely property. In the end she decides to pass as white and live in the town nearby where she grew up.
Wolf by the Ears won the 1994 Senior Young Reader's Choice Award.