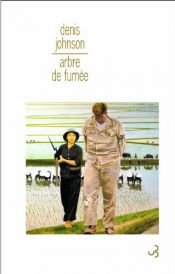 This is the story of Skip Sands—spy-in-training, engaged in Psychological Operations against the Vietcong—and the disasters that befall him thanks to his famous uncle, a war hero known in intelligence circles simply as the Colonel. This is also the story of the Houston brothers, Bill and James, young men who drift out of the Arizona desert into a war in which the line between disinformation and delusion has blurred away. In its vision of human folly, and its gritty, sympathetic portraits of men and women desperate for an end to their loneliness, whether in sex or death or by the grace of God, this is a story like nothing in our literature.
Tree of Smoke is Denis Johnson’s first full-length novel in nine years, and his most gripping, beautiful, and powerful work to date.