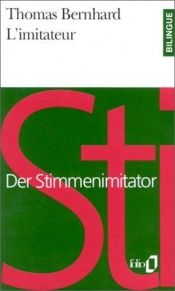 The work of late Austrian writer Thomas Bernhard was no one's idea of an uplifting read. Given to writing mostly dense, bleak, darkly comic, one-paragraph novels such as The Loser, Bernhard has rarely received the audience he deserves. The Voice Imitator, while unlikely to change this basic fact, does give us Bernhard's singularly pessimistic worldview in perhaps more digestible little chunks--some of them very little, indeed. (Here is the entirety of the short story "Mail": "For years after our mother's death, the Post Office still delivered letters that were addressed to her. The Post Office had taken no notice of her death.")

In fact, none of the 104 stories collected here are longer than a page--and with the tremendous variety of disaster and tragedy they contain (e.g., suicide, disappearance, murder, madness, corruption), there's not much room for characterization or plot. These read more like fragments, anecdotes, or snippets of news stories than conventional short narratives. Despite their brevity, however, these stories display all the signature elements of the Bernhardian oeuvre: cynicism, misanthropy, contempt for his native country, and withering scorn for the futility of all human effort. They might be an acquired taste--but one with undeniable force. With his black humor, deadly satire, and loathing for bureaucracy, Bernhard is the spiritual heir of writers such as Kafka, Grass, and Beckett--perhaps on a very bad day.