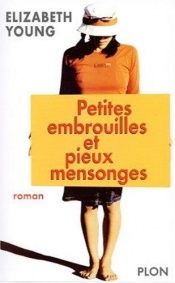 Unmarried, thirty-year-old Sophy Metcalfe told a little white he to soothe her nagging mother. The white lies name was "Dominic," the ideal boyfriend: charming, successful, the kind of prospective son-in-law that would make any mother proud. But now that Sophy's thin and beautiful sister, Belinda, is getting married, Dominic is going to have to make an appearance in the flesh -- which should be a pretty neat trick ... since the genuine article vanished from Sophy's life after a single, singularly unmemorable evening. So she resorts to a very drastic measure -- aka Josh Carmichael, the escort she hires at the very last minute, sight unseen.

But the trouble with white lies is that they tend to multiply. The trouble with rugged, too-sexy, and independent Josh is ... well, that Sophy's actually beginning to like him! Even if they make it through the Wedding Day from Hell together -- with its new intrigues, old flames, and all-too-familiar faces -- there's the night that follows... and, of course, the morning after. And that could end up being the biggest trouble of all!

A hip, witty, and freshly fantastic delight, Asking for Trouble is the most hilarious and knowing novel to make the scene since Bridget Jones first set pen to paper to record her most intimate innermost thoughts.