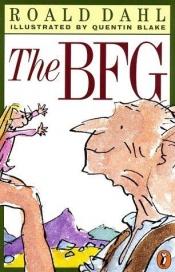 The BFG is a children's book written by Roald Dahl and illustrated by Quentin Blake, first published in 1982. The book was an expansion of a story told in Danny, the Champion of the World, an earlier Dahl book. Dahl dedicated The BFG to his daughter Olivia, who died of measles encephalitis at age seven.
An animated film based on the book was released in 1989 with David Jason providing the voice of the BFG and Amanda Root as the voice of Sophie. It has also been adapted as a theatre performance. A live action version based on the book directed by Steven Spielberg is in production with a release date in 2016.

A funny, lovely book that was one of my favourites as a kid.

One of the best children's books I've read. I love how Roald Dahl can tell a great children's story with snarkiness and wit.