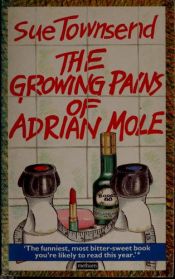 The Growing Pains of Adrian Mole, a novel by Sue Townsend, is the 2nd book in the Adrian Mole series, following on from The Secret Diary of Adrian Mole, Aged 13¾. It focuses on the worries and regrets of a teenage aspiring intellectual. The novel is included in the omnibus Adrian Mole: From Minor to Major.
The book is written in a diary style and set in 1982 through to mid-1983. Notable events in this volume are the breakup and later reconciliation of Adrian and Pandora, Adrian's attempt to run away from home and subsequent breakdown, the birth of his sister Rosie Mole, and Adrian's general worry about his O levels and nuclear war.

Then He Ate My Boy Entrancers