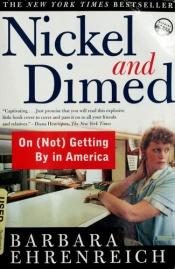 Nickel and Dimed: On Getting By in America is a book written by Barbara Ehrenreich. Written from her perspective as an undercover journalist, it sets out to investigate the impact of the 1996 welfare reform act on the working poor in the United States.
The events related in the book took place between spring 1998 and summer 2000. The book was first published in 2001 by Metropolitan Books. An earlier version appeared as an article in the January 1999 issue of Harper's magazine. Ehrenreich later wrote a companion book, Bait and Switch, which discusses her attempt to find a white-collar job.

The Geography of Nowhere

Rivethead: Tales From the Assembly Line