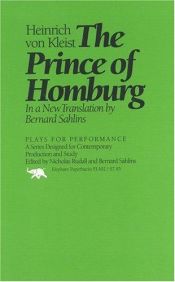 The Prince of Homburg is a play by Heinrich von Kleist written in 1809–10, but not performed until 1821, after the author's death. A performance during his lifetime was not possible because Princess Marianne of Prussia, by birth a member of the Hesse-Homburg family, to whom Kleist had given sight of the work with a dedication, felt her family honour insulted by it.
The title relates to the real Prince of Homburg at the Battle of Fehrbellin in 1675, Friedrich von Hessen-Homburg, but beyond the name and place there is little if any resemblance between the Romantic character in the play and the eponymous Friedrich, a successful professional soldier of many years' standing.
The play has been filmed a number of times, and inspired the opera Der Prinz von Homburg by Hans Werner Henze.

The Rider on the White Horse

Reveries Of A Solitary Walker