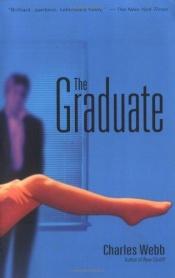 The Graduate is a 1963 novella by Charles Webb, who wrote it shortly after graduating from Williams College. It tells the story of Benjamin Braddock, who, while pondering his future after his graduation, has an affair with the older Mrs. Robinson, the wife of his father's business partner.
It was adapted into the highly successful 1967 movie The Graduate, directed by Mike Nichols and with Dustin Hoffman in the title role. Webb has stated he never felt comfortable with the attention the movie brought him because he felt it distracted from his status as a serious artist. He did not receive any royalties from the film and has stated he is glad it happened that way.
On the episode of the AMC television show Movies That Shook the World devoted to the film adaptation, Webb revealed the identity of the real-life inspiration for Mrs. Robinson: Jane Erickson, the wife of an associate of Webb's father. However, that was the extent of any similarity with the novel; Webb denied having a relationship with her.
A sequel titled Home School, which takes place ten years after the ending of the first novel, was published by Hutchinson in June 2007.