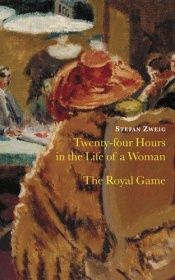 Following the death of her husband, a middle-aged Englishwoman travels through Europe to escape loneliness and boredom. One evening during her stay at the French Riviera, while enjoying the atmosphere of the Monte Carlo Casino, she becomes mesmerized by the obsessive gambling of a young Polish aristocrat. This fateful encounter leads to passion, despair and death, changing both their lives forever.

Stefan Zweig-novelist, librettist, poet, translator and biographer-was born in 1881, a member of a wealthy Austrian-Jewish family. He was educated in Berlin and Vienna. His stories and novellas were collected in 1934 when, faced with the rise of the Nazis he moved to London, taking British citizenship, before settling in Brazil, where, in 1942, he and his wife were found dead in bed.