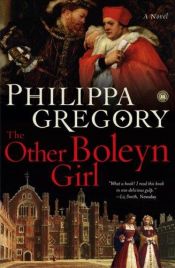 The Other Boleyn Girl is a alternate history novel written by British author Philippa Gregory, loosely based on the life of 16th-century aristocrat Mary Boleyn, the sister of Anne Boleyn, of whom little is known. Inspired by the life of Mary, Gregory depicts the annulment of one of the most significant royal marriages in English history and conveys the urgency of the need for a male heir to the throne. Much of the history is highly distorted in her account.
Reviews were mixed; some said it was a brilliantly claustrophobic look at palace life in Tudor England, while others are troubled by the lack of historical accuracy. It has enjoyed phenomenal success and popularity since its publication.
The novel was followed by a sequel called The Queen's Fool, set during the reign of Henry's daughter, Queen Mary. The Queen's Fool was followed by The Virgin's Lover, set during the early days of Queen Elizabeth's reign.