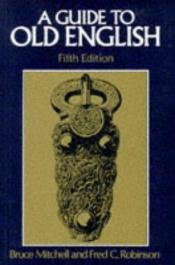 A guide to Old English

Key features of Part One are the fact that sound changes are not treated as an abstract system divorced from the texts, but are discussed when they become relevant to an understanding of the apparent irregularities in inflexion; the authoritative section on syntax; and the introduction to Anglo-Saxon studies, which discusses language, literature, history, archaeology, and ways of life. In Part Two the prose texts selected are those traditionally chosen by teachers precisely because they offer the best introduction to the literature and culture of the period. The verse texts, which with the exception of four extracts from Beowulf are all complete, show something of the range that Old English poetry offers in mood, intensity of feeling, humour, and natural observation. The texts are accompanied by full explanatory notes at the foot of the page and a detailed glossary.

Although most readers of A Guide to Old English will be undergraduate and graduate students, the book has been written so that it can be used by those working on their own who wish simply to gain a greater understanding and enjoyment of the language and literature of the Anglo-Saxons.

The Stories of English