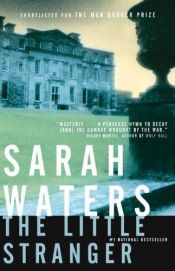 The Little Stranger is a 2009 gothic novel written by Sarah Waters. It is a ghost story set in a dilapidated mansion in Warwickshire, England in the 1940s. Departing from her earlier themes of lesbian and gay fiction, Waters' fifth novel features a male narrator, a country doctor who makes friends with an old gentry family of declining fortunes who own a very old estate that is crumbling around them. The stress of reconciling the state of their finances with the familial responsibility of keeping the estate coincides with perplexing events which may or may not be of supernatural origin, culminating in tragedy.
Reviewers note that the themes in The Little Stranger are alternately reflections of evil and the social upheaval of the class system in postwar Britain. Waters stated that she did not set out to write a ghost story, but began her writing with an exploration of the rise of socialism in the United Kingdom and how the fading gentry dealt with losing their legacies. A mix of influences is evident to reviewers: Henry James, Shirley Jackson, Wilkie Collins, and Edgar Allan Poe.