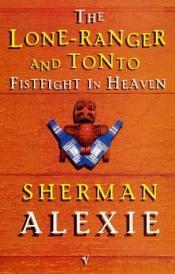 The Lone Ranger and Tonto Fistfight in Heaven is a 1993 collection of interconnected short stories by Sherman Alexie. The characters and stories in the book, particularly "This Is What It Means to Say Phoenix, Arizona", provided the basis of Alexie's screenplay for the film Smoke Signals.
The collection was originally released in 1993; it was reissued in 2003, with two new stories, by Grove Atlantic Press.
The Lone Ranger and Tonto Fistfight in Heaven, published in 1993 by Atlantic Monthly Press, was Sherman Alexie's breakthrough book. Composed of twenty-two interconnected stories with recurring characters, the work is often described by critics as a short-story collection, though some argue that it has novel-like features similar to Louise Erdrich's Love Medicine. The book's central characters, Victor Joseph and Thomas Builds-the-Fire, are two young Native-American men living on the Spokane Indian Reservation, and the stories describe their relationships, desires, and histories with family members and others who live on the reservation.