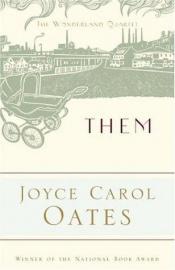 Them is a novel by Joyce Carol Oates, the third in the Wonderland Quartet she inaugurated with A Garden of Earthly Delights. It was first published by Vanguard in 1969 and it won the U.S. National Book Award for Fiction in 1970.
Many years and many awards later, Oates surmised that them and Blonde were the works she will most be remembered for, and would most want a new reader to select, though she added that "I could as easily have chosen a number of titles."

Even Cowgirls Get the Blues