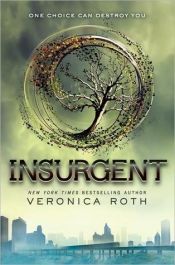 Insurgent is a 2012 science fiction young adult novel by American novelist Veronica Roth and the second book in the Divergent trilogy. As the sequel to the 2011 bestseller Divergent, it continues the story of Tris Prior and the dystopian post-apocalyptic version of Chicago. Following the events of the previous novel, a war now looms as conflict between the factions and their ideologies grows. While trying to save the people that she loves, Tris faces questions of grief, forgiveness, identity, loyalty, politics, and love.
The book was first published on May 1, 2012 by the HarperCollins imprints Katherine Tegen Books in the U.S. and HarperCollins Children's Books in the U.K, and a "Collector's Edition" was published on October 30 in the United States. Insurgent received mostly positive reviews from critics, with reviewers praising Roth's writing.
A film adaptation of the novel was released on March 20, 2015.