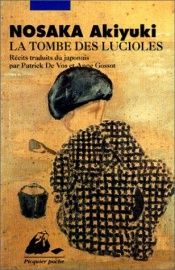 Grave of the Fireflies is a 1967 semi-autobiographical short story by Japanese author Akiyuki Nosaka. It is based on his experiences before, during, and after the firebombing of Kobe in 1945. One of his sisters died as the result of a sickness, his adoptive father died during the firebombing proper, and his younger adoptive sister Keiko died of malnutrition in Fukui. It was written as a personal apology to Keiko, regarding her death.
The story was first published in Japan in Ōru Yomimono, a monthly literature magazine published by Bungei Shunju, in October 1967. Nosaka won the Naoki Prize for best popular literature for this story and American Hijiki, which was published a month before. Both short stories along with four others were bundled as a book in 1968 published by Shinchōsha. The short story was later adapted into the 1988 anime film Grave of the Fireflies, directed by Isao Takahata. The film was released on April 16, 1988, over twenty years from the publication of the original work. It was adapted again into a live action television film Grave of the Fireflies.
Nosaka explained that Grave of the Fireflies is a "double-suicide story."