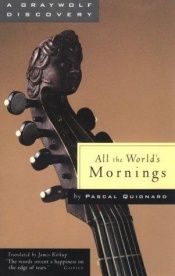 All the World's Mornings is a 1991 novel by Pascal Quignard. It is a story of the apprenticeship of Marin Marais in the house of the austere, recluse, and mysterious violist Monsieur de Sainte-Colombe, obsessed with his late wife, and of his romantic entanglements with his master's two daughters, Madeleine and Toinette. The basis of the story is taken from an anecdote from the work of Evrard Titon du Tillet. Among the historical facts that the book outlines are Sainte-Colombe's addition of the viola da gamba's seventh and lowest string.
The novel's narration has a contemplative pace, weaving in impressions of melancholy music and still life paintings. Sainte-Colombe is portrayed as a country recluse who eschews court life because of its artificiality.
In the same year, the author participated in creating the screen adaptation with director Alain Corneau for the movie of the same title.