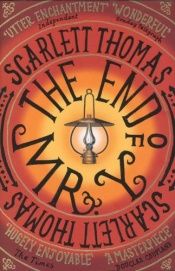 The End of Mr. Y is a novel by British author Scarlett Thomas. The book tells the story of Ariel Manto, a PhD student who has been researching the 19th century writer Thomas Lumas. She finds an extremely rare copy of Lumas' novel The End of Mr. Y in a second-hand bookshop. The book is rumoured to be cursed - everyone who has read it has died not long afterwards.
Central to Lumas' book is the "Troposphere" – a place where all consciousness is connected and you can enter other people's minds and read their thoughts. The book contains the recipe for a homeopathic formula that Lumas' hero uses to enter the Troposphere. Manto uses the recipe to reproduce the formula and subsequently enters the Troposphere herself.
The book mentions that her surname is fictitious and based on an anagram; Ariel Manto is an anagram of I am not real.
As have Janette Turner Hospital and Andrew Crumey, the writer explores the relationships between quantum physics and post-modernist and deconstructionist theory. The description of the Troposphere has been compared to the novels of Neal Stephenson and William Gibson, and shares similarities to The Matrix.