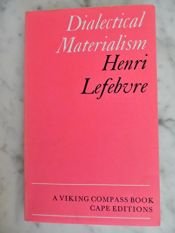 With the aim of widening the scope of Marxist theory, Henri Lefebvre finished Dialectical Materialism just before the beginning of World War II and the Resistance movement against the Vichy regime. As the culmination of Lefebvre’s interwar activities, the book highlights the tension-fraught relationship between Lefebvre and the French Communist Party (PCF). For Lefebvre, unlike for the PCF, Marxism was above all a dynamic movement of theory and practice. Dialectical Materialism is an implicit response to Joseph Stalin’s Dialectical and Historical Materialism and an attempt to show that the Stalinist understanding of the concept was dogmatic and oversimplified.

This edition contains a new introduction by Stefan Kipfer, explaining the book’s contemporary ramifications in the ever-expanding reach of the urban in the twentieth-century Western world.

Words I wish I wrote