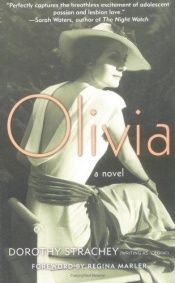 Considered one of the most subtle and beautifully written lesbian novels of the century, this 1949 classic returns to print in a Cleis Press edition.

Dorothy Strachey’s classic Olivia captures the awakening passions of an English adolescent sent away for a year to a small finishing school outside Paris. The innocent but watchful Olivia develops an infatuation for her headmistress, Mlle. Julie, and through this screen of love observes the tense romance between Mlle. Julie and the other head of the school, Mlle. Cara, in its final months.

Although not strictly autobiographical, Olivia draws on the author’s experiences at finishing schools run by the charismatic Mlle. Marie Souvestre, whose influence lived on through former students like Natalie Barney and Eleanor Roosevelt. Olivia was dedicated to the memory of Strachey’s friend Virginia Woolf and published to acclaim in 1949. Colette wrote the screenplay for the 1951 film adaptation of the novel. In 1999, Olivia was included on the Publishing Triangle’s widely publicized list of the 100 Best Gay and Lesbian Novels of the 20th Century.

Paris Was a Woman: Portraits from the Left Bank