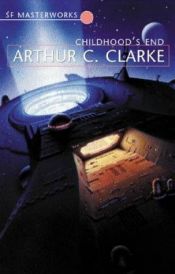 Childhood's End is a 1953 science fiction novel by the British author Arthur C. Clarke. The story follows the peaceful alien invasion of Earth by the mysterious Overlords, whose arrival begins decades of apparent utopia under indirect alien rule, at the cost of human identity and culture.
Clarke's idea for the book began with his short story "Guardian Angel", which he expanded into a novel in 1952, incorporating it as the first part of the book, "Earth and the Overlords". Completed and published in 1953, Childhood's End sold out its first printing, received good reviews, and became Clarke's first successful novel. The book is often regarded by both readers and critics as Clarke's best novel, and is described as "a classic of alien literature". Along with The Songs of Distant Earth, Clarke considered Childhood's End one of his favourite own novels. The novel was nominated for the Retro Hugo Award for Best Novel in 2004.
Attempts to adapt the novel into a film have been made without success. Director Stanley Kubrick expressed interest in the 1960s, but collaborated with Clarke on 2001: A Space Odyssey instead.

Islands in the Sky