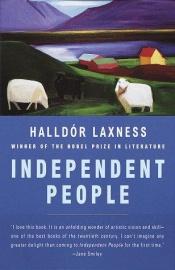 Independent People is an epic novel by Nobel laureate Halldór Laxness, originally published in two volumes in 1934 and 1935; literally the title means "Self-standing [i.e. self-reliant] folk". It deals with the struggle of poor Icelandic farmers in the early 20th century, only freed from debt bondage in the last generation, and surviving on isolated crofts in an inhospitable landscape.
The novel is considered among the foremost examples of social realism in Icelandic fiction in the 1930s. It is an indictment of materialism, the cost of the self-reliant spirit to relationships, and capitalism itself. This book, along with several other major novels, helped Laxness win the Nobel Prize in Literature in 1955.