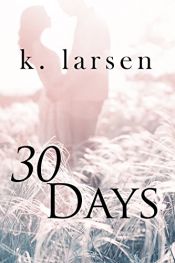 Elle's life is a catastrophe.
Dealing with the loss of her only sister. A suicide attempt that doesn't end in death and an abusive husband who wants her inheritance. Elle is at rock bottom, but she has a list and thirty things she's determined to accomplish. Love isn't on that list but it comes crashing unexpectedly into her life.

Ryan's current lifestyle requires a lot of funds, he likes his toys. He married his wife knowing she had a hefty inheritance and is bent on securing it for himself by any means possible.

Boxing coach and personal trainer, Colin, is content with his life, until a chance meeting with a woman dining alone at a restaurant sets his heart in motion. As secrets unveil themselves his only goal becomes holding on to what he's found.

Dr. Rand is floundering in the wake of his wife leaving him. His alimony payments are forcing him toward bankruptcy at an alarming rate. When he's offered a large lump sum that would solve his financial problems, he takes it, condemning an innocent woman to a life of misery.

Will Colin be able to hold on to Elle with so many people working against them?