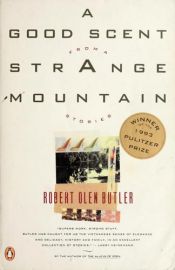 A Good Scent from a Strange Mountain

A Good Scent from a Strange Mountain is a 1992 collection of short stories by Robert Olen Butler. It received the Pulitzer Prize for Fiction in 1993.
Each story in the collection is narrated by a different Vietnamese immigrant living in the U.S. state of Louisiana. The stories are largely character-driven, with cultural differences between Vietnam and the United States as an important theme. Many of the stories were first published in journals such as The Hudson Review, The Southern Review, and The Virginia Quarterly Review. The collection was re-released in 2001 with two additional stories, "Salem" and "Missing".

The Things They Carried