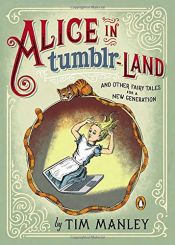 Alice in Tumblr-land: And Other Fairy Tales for a New Generation

The Ugly Duckling still feels gross compared to everyone else, but now she’s got Instagram, and there’s this one filter that makes her look awesome. Cinderella swaps her glass slippers for Crocs. The Tortoise and the Hare Facebook stalk each other. Goldilocks goes gluten free. And Peter Pan finally has to grow up and get a job, or at least start paying rent.

Here are more than one hundred fairy tales, illustrated and re-imagined for today. Instead of fairy godmothers, there’s Siri. And rather than big bad wolves, there are creepy dudes on OkCupid. In our brave new world of social networking, YouTube, and texting, fairy tales can once again lead us to “happily ever after”—and have us laughing all the way.

Don't Make a Black Woman Take Off Her Earrings: Mad …

And Here's the Kicker: Conversations with 21 Top Hu …

Karlology: What I've Learnt So Far

Dave Barry Slept Here: A Sort of History of the Uni …