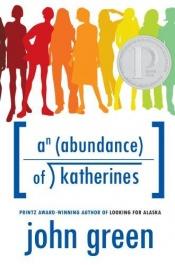 An Abundance of Katherines

An Abundance of Katherines is a young adult novel by John Green. Released in 2006, it was a finalist for the Michael L. Printz Award.
An appendix explaining some of the more complex equations Colin uses throughout the story was written by Daniel Biss, a close friend to Green.
Following the announcement of the name of his latest book, The Fault in Our Stars, after which John Green's fans made hundreds of book covers, Penguin announced a contest in which they would allow the fans to design the new cover of An Abundance of Katherines.

love this book,from the beggining to the end s2