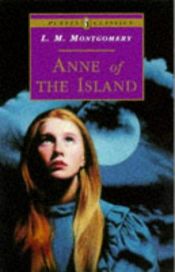 New adventures lie ahead as Anne Shirley packs her bags, waves good-bye to childhood, and heads for Redmond College. With old friend Prissy Grant waiting in the bustling city of Kingsport and frivolous new pal Philippa Gordon at her side, Anne tucks her memories of rural Avonlea away and discovers life on her own terms, filled with surprises...including a marriage proposal from the worst fellow imaginable, the sale of her very first story, and a tragedy that teaches her a painful lesson. But tears turn to laughter when Anne and her friends move into an old cottage and an ornery black cat steals her heart. Little does Anne know that handsome Gilbert Blythe wants to win her heart, too. Suddenly Anne must decide if she's ready for love...

Book 3 is several steps up from book 2 as far as likeability goes. Unfortunately this book still ranks nowhere near book 1. Perhaps that's impossible, and let's be honest, I've never written even one good book in my life, so if one truly wonderful book is 'all' Montgomery managed, I'll never care. But I'm still going to be honest and say that this book is still full of irritations. Davy is, unfortunately, still present, but he is at least interspersed with more likeable scenes than just scenes including other intolerable characters. Oddly, Anne's college friends are rather forgettable. The only one that stands out is Phil, who is mostly likeable but who unfortunately plays the completely unexpected (and unexplained) role of deus ex machina at the end of the book. Wiki's character listing sums up just how interchangeable the other two were better than I can: <i>Priscilla Grant - Anne's friend from Queen's Academy, Priscilla is one of Anne's roommates at Patty's Place. Stella Maynard - Anne's friend from Queen's Academy, Stella is one of Anne's roommates at Patty's Place.</i> Which was which? Yeah, I can't honestly say I remember, and I just put the book down. Aunt Jimsie seemed created solely to be cantankerous and was consequently as easily forgettable. There was an interestingly morbid scene with Ruby Gillis in the middle of the book - rather unexpected and as others have criticized, Anne's role in it was rather mawkish, but I rather liked it simply because, in a storyline that was mostly Anne cruising through life with any problems being happily solved to let her do what she wants, it was firm and solid stumbling block. And while (as is natural in youth) it does fade quickly, Anne's struggle with how to cope with the idea of her own mortality was, while it lasted, good. In fact I was rather surprised it didn't come up when Gilbert has his brush near the end. Royal Gardener is another Dora, which is rather irritating. Again, the author actually describes her own character as 'boring'. And it's irritating because it would have been nice to see a character who actually was a threat to Gilbert, instead of someone who, every time he is mentioned, the author spends half the time describing as perfect and the other half making sure we understand that Anne is totally sure she's in love with him... maybe. Possibly. Oh whoops, where'd that stray thought about Gilbert slip in from, AGAIN? It was really just killing time for the finale where they fall into each other's arms in true Anne-of-the-first-book style and swear undying love to each other. No, I'm not making that up: <i>"But it wasn't, sweetheart. Oh, Anne, this makes up for everything, doesn't it? Let's resolve to keep this day sacred to perfect beauty all our lives for the gift it has given us."</i> So anyway, half the book is decent, the other half is kinda meh, which still leaves it straggling in the dust of book 1's effort, and left me fairly sure that it's not really worth continuing on with any of the others in the series. As I said - I am perfectly content if Montgomery was only ever a one hit wonder, because when she did write a hit, she wrote it GOOD. Edit to add: There was one other thing that really bugged me, that I completely forgot to write about, is that Anne's actually a nasty little snot from time to time, especially in book 3. The perfect example is this section: <i>But when the boat steamed out of Charlottetown harbor things took a turn for the better. The rain ceased and the sun began to burst out goldenly now and again between the rents in the clouds, burnishing the gray seas with copper-hued radiance, and lighting up the mists that curtained the Island's red shores with gleams of gold foretokening a fine day after all. Besides, Charlie Sloane promptly became so seasick that he had to go below, and Anne and Gilbert were left alone on deck. "I am very glad that all the Sloanes get seasick as soon as they go on water," thought Anne mercilessly. "I am sure I couldn't take my farewell look at the 'ould sod' with Charlie standing there pretending to look sentimentally at it, too."</i> Oh good, hipster Anne rears her ugly head. "I'm the only one who *really* feels these emotions, nobody else - you know, like somebody who actually did live their entire life on the island as opposed to getting adopted at age 11 and moving there - could possibly feel just the tiniest bit sentimental about PEI!" There are also many off-handed comments, from both Anne and her pretty-pretty friends, about people's eyes being goggly and someone else's ears being too big... quite a hypocritical little attitude from someone who once resorted to physical violence for being called "carrots". And her attitude about Charlie Sloane's attitude is pretty funny too. I'm not saying he might not be a pretty irritating guy, but his worst sin seems to be that he acts superior - but then, Anne spent most of her PEI life doing the same to Gilbert Blythe and Josie Pye, so, uhhh... Apparently Anne was a lot nicer before she got some self confidence and decided that only the people she likes (coincidentally all good looking people, the only exception being adults who are in some way useful to her - Marilla and Matthew adopted her, Mrs. Lynde allowed her to go to school, etc) are allowed to exist around her. And they most *certainly* are not allowed to have dreams or emotions or anything!