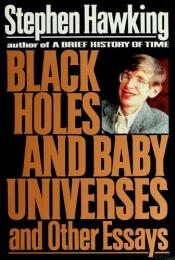 Black Holes and Baby Universes and Other Essays

Black Holes and Baby Universes and other Essays is a popular science book by English astrophysicist Stephen Hawking.
This book is a collection of essays and lectures written by Hawking, mainly about the makeup of black holes, and why they might be nodes from which other universes grow. Hawking discusses black hole thermodynamics, special relativity, general relativity, and quantum mechanics. Hawking also describes his life when he was young, and his later experience of motor neurone disease. The book also includes an interview with Professor Hawking.

A Briefer History of Time

In Search of Schrödinger's Cat

The Universe in a Nutshell

Fermat's Enigma: The Epic Quest to Solve the World' …

Relativity: The Special and the General Theory

Hyperspace: A Scientific Odyssey Through Parallel U …