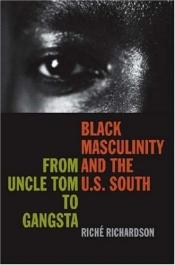 Black Masculinity And the U.S. South: From Uncle Tom to Gangsta (The New Southern Studies)

This pathbreaking study of region, race, and gender reveals how we underestimate the South's influence on the formation of black masculinity at the national level. Many negative stereotypes of black men—often contradictory ones—have emerged from the ongoing historical traumas initiated by slavery. Are black men emasculated and submissive or hypersexed and violent? Nostalgic representations of black men have arisen as well: think of the philosophical, hardworking sharecropper or the abiding, upright preacher. To complicate matters, says Riché Richardson, blacks themselves appropriate these images for purposes never intended by their (mostly) white progenitors.

Starting with such well-known caricatures as the Uncle Tom and the black rapist, Richardson investigates a range of pathologies of black masculinity that derive ideological force from their associations with the South. Military policy, black-liberation discourse, and contemporary rap, she argues, are just some of the instruments by which egregious pathologies of black masculinity in southern history have been sustained. Richardson's sources are eclectic and provocative, including Ralph Ellison's fiction, Charles Fuller's plays, Spike Lee's films, Huey Newton's and Malcolm X's political rhetoric, the O. J. Simpson discourse, and the music production of Master P, the Cash Money Millionaires, and other Dirty South rappers.

Filled with new insights into the region's role in producing hierarchies of race and gender in and beyond their African American contexts, this new study points the way toward more epistemological frameworks for southern literature, southern studies, and gender studies.