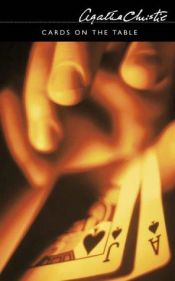 Cards on the Table

Cards on the Table is a detective novel by Agatha Christie and first published in the UK by the Collins Crime Club on 2 November 1936 and in the US by Dodd, Mead and Company the following year. The UK edition retailed at seven shillings and sixpence and the US edition at $2.00.
The book features the recurring characters of Hercule Poirot, Colonel Race, Superintendent Battle and the bumbling crime writer Ariadne Oliver, making her first appearance in a Poirot novel. Identifying the murderer, per Mrs Christie, depends wholly on discerning the psychology of the suspects.

One, Two, Buckle My Shoe

Death in the Clouds

Taken at the Flood